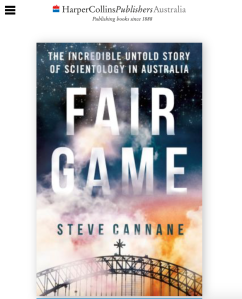 In 2016 HarperCollins Publishers Australia published a book authored by ABC journalist Steve Cannane, Fair Game: The Incredible Untold Story of Scientology in Australia. Cannane and the publishers are being sued for defamation by Dr John Gill and former psychiatrist John Herron. They were involved in the administration of deep sleep therapy and electroconvulsive therapy at the Chelmsford Private Hospital in Sydney in the 1970s.

Deaths of patients at Chelmsford Private Hospital Sydney in the 1970s were the subject of coronial inquests in the 1980s. Ultimately a Royal Commission made findings published in 1990 condemning deep sleep therapy. The Royal Commission also made a number of adverse findings against Drs Gill and Herron in relation to their roles at Chelmsford Private Hospital and referred material to the Commonwealth Director of Public Prosecutions and the Medical Tribunal for investigation as a basis for ‘possible criminal proceedings’ against the two doctors and others.

In chapter 14 of his book, Cannane wrote about the Chelmsford scandal, and the role played by Scientology figures in exposing it.  It was a rare case of Scientologists making a positive contribution to something other than their phoney Church. However, Gill and Herron claim that the chapter conveys defamatory imputations including that the doctors engaged in medical malpractice and caused the death of patients through gross negligence. They claim that Cannane and HarperCollins are therefore liable for damage to their reputations.

The trial is being heard by the Federal Court in Sydney. (See this link for listing details.)

I’m a latecomer to this trial and therefore missed the evidence given by Dr Gill and Mr Herron. Unfortunately only New York journalist Tony Ortega has publicly reported on the trial so far. (Also here.) It has not been covered at all by Australian media despite the Chelmsford Private Hospital scandal receiving widespread media coverage in the 1980s. It’s difficult to understand why the media is not reporting given the high public interest in the facts surrounding the large number of deaths and adverse events at the hospital linked with the controversial therapies.

It also raises questions about dysfunction within the government bodies that meant that the doctors were never properly tried, and whether the regulation of health practitioners has improved in the decades since.

John Herron was scheduled to give evidence, however his examination was discontinued on 9 June due to illness. Mr Herron is now reportedly in hospital and it is not clear if or when he may be able to continue giving evidence.

From what I can gather the respondents (defendants) have pleaded defences of justification, statutory qualified privilege and Section 29 Defences of fair report of proceedings of public concern. ‘It is a defence to the publication of defamatory matter if the defendant proves that the matter was, or was contained in, a fair report of any proceedings of public concern‘ (such as a court proceeding or in this case a Royal Commission.)

Counsel for the applicants, Sue Chrysanthou, said that the defence is unarguable. She argued to the effect that the chapter in Cannane’s book is not a fair report of proceedings of public concern because it includes the author’s own commentary on the Royal Commission findings and relies on and includes material other than that found in the RC report, such as interviews he conducted with witnesses. Ms Chrysanthou also argued that the chapter doesn’t come across as a report of the Royal Commission and doesn’t take into account all of the RC evidence, that was given over nearly a year, and all of the RC findings which encompass 12 volumes. She contended that the author did not mention the RC findings until well into the chapter, and that he states some material as fact without attributing it to the RC material.

Counsel for the respondents, Tom Blackburn SC, argued in reply that a publication does not cease to be a fair report if it includes commentary or other extraneous material, and that Cannane had made it clear from early in the chapter, in footnotes and other references, where he was relying on Royal Commission material .

Mr Blackburn said that a fair report is not required to cover the entirety of the evidence and findings of a proceeding. He said the law recognised that a reporter must be at liberty to be selective and cover only those aspects of a proceeding that appear to be of particular public interest, as long as the reporting is substantially accurate and fair. The book, after all, is about Scientology, with the Chelmsford events forming only part of the narrative.

He also argued that it was not appropriate to determine whether the Section 29 defence can be relied upon until a determination is made as to which imputations are conveyed by the publication (which isn’t decided until all evidence and arguments are heard).

I imagine that if the strike-out application succeeds it will set a precedent that may hamper the ability of investigative journalists to rely on official proceedings and reports when covering controversial events.

(Comments will be moderated. Scientology propaganda will not be published.)