While the Sunday Telegraph, the ABC and the Echo have now reported on the launch of an investigation into the College of Universal Medicine’s charitable fundraising authority, Serge Benhayon and his trusty UM *Facts* and defamation team have lunged into propaganda free fall – lashing out at critics and making laughable charades of innocence. It’s painting a compelling picture of the college’s ‘utmost integrity’ and Sergio’s commercial religion of ‘every day self-loving choices’.

UM were quick to publish their reaction, a carbon copy of previous hysteria towards media scrutiny. This time News Ltd were accused of media bias and sensationalism, and that they’d missed the ‘real’ story, and the Brides of Serge busied themselves pasting that palaver on every available space on the internet – except my sites. Comments are open, ladies.

UM’s main site removed this comment from barrister Charles Wilson soon after I questioned it:

‘College board member and Brisbane barrister Charles Wilson contacted the manager of investigations at the Office of Liquor and Gaming, who told him when the complaint was made and said he “shouldn’t lose any sleep over it”.

It is understood to relate to allegations of funds being “dispensed inappropriately”.’

I’d already taken a screenshot, which has been sent to the manager and a few parliamentary offices.

The following day, Charlie changed his tune and released a statement saying:

‘The College has not received notification from OLGR about the matter and is unaware of the grounds of complaint.’

But that didn’t stop him hurling a few accusations against Lance, for making serial groundless, harassing complaints to regulators about Universal Medicine all which have been dismissed.

Charles also gave an interview this morning [unsure yet whether the recording will be posted online – stay tuned] repeating that nonsense and calling us cyber-bullies. The interviewer told him she’d seen the ‘facts’ site, which lists him as an author, and it looked like we were the ones being bullied, but Charles insists all of that false and defamatory rot is ‘the facts’.

He also said that the CoUM is a ‘student initiative’, nothing to do with profits for Serge, and that the College would charge for its courses.

“It’s there to benefit no-one but the purpose of the college.

“Conversely, businesses that conduct educational activities in a private context, in a full profit context, distribute their profits back to shareholders.”

– was the heading on another UM site blog post.

It almost fooled me into thinking Serge was going to rise to the challenge and start a legal bluff.

With such a history of damaging lies in the press and online the reader and no doubt journalists would have asked themselves why hasn’t Serge Benhayon taken Esther Rockett and Lance Martin to court yet?

The answer to that question is a testament to the confidence that Serge Benhayon has in the integrity of his business and his private life.

“I could have resorted to legal action with regard to defamation. Instead, I decided to allow the Government inquires [sic] should they come forth…

And the only ones who believe that are Serge’s religious investors.

“After a dozen or so HCCC complaints, all vexatious and lacking any substance whatsoever other than lies, all were rightly dismissed.

“So too was the AHPRA complaint as was the ATO and Border Security. The latter two complaints were filled [sic] with the gang’s insistence that I avoid tax and or that I am involved in money laundering.” said Serge Benhayon.

Was there an ATO investigation that cleared him of wrongdoing? When did that happen? Do you have documentation for that, Serge?

As for Border Security – that wasn’t us. Wouldn’t we love to know which country that was…

Someone else must have their eye on him.

“There is nothing like shutting down lies by allowing full transparency into one’s affairs. This I have done in every case and in every one of their accusations.

So why has so much publicity been removed from the UM websites the minute anyone asks questions? The whole Esoteric Breast Massage site erased, for example? What about the ‘full transparency’ of course structures and fee schedules for the phoney accreditation courses? How about some evidence of Serge’s ten years or whatever of philanthropy? Where’s the evidence of that?

Had I taken the legal route, an easy win on all counts, I would then be accused of using wealth to shut down my detractors. Hence, and instead, it has been wiser to welcome the investigations and actually assist them to go further.

As I knew would be the case, every investigation has revealed a completely transparent, highly ethical outfit, and we have ended up receiving very positive feedback from the Government agencies concerned.

There was no wrongdoing to be found, and hence the very existence of the complaints was to drum up sensationalist and scurrilous focus, a scatter-‐gun approach, launching any vile attack and accusation imaginable, in the hope that at least some of it would stick and succeed in destroying myself and my business.

None of it has, as each agency in turn has dismissed every complaint lodged.”

What about the UK Charity Commission action against the Sound Foundation, UM’s UK ‘unit of service’, which found trustee conflicts of interest and issues of public benefit?

What about the TGA instigated changes to the marketing of his herbal products?

Investigations into controversial Lismore-based healthcare business Universal Medicine by the Therapeutic Goods Administration have resulted in the business removing claims about supplements it provides from its website. Echo Net Daily

Or this ‘positive feedback’ in a review decision letter from Health Care Complaints Commissioner, Kieran Pehm:

I want to reassure you that the decision by the Commission not to investigate your complaint has been made in accordance with the law under which it operates and this decision should not be viewed as an endorsement or any other support for Mr Benhayon or Universal Medicine.

In response to scrutiny, the UM faulty *facts* team continued their false and defamatory offensive against us. We’re still cyber-bullies, internet trolls and liars, but the embellishments have grown more bizarre.

On the workshop manual images of inappropriate touching of sexual abuse victims:

It appears Esther took this to mean making up false stories including using innocuous workshop manual photos to make cries of ‘inappropriate touching of sexual abuse victims’ on her blogs and to authorities. All complaints in this regard have been dismissed since there was no case to answer.

For UM followers, touching the genitals of abuse survivors is ‘innocuous’, but a father of a child living among these people – asking why little girls stay in Serge’s home – is a pervert. That nonsense was hammered home by Alison Greig with thousands of words accusing the complainant of an unwholesome ‘sexual obsession’, which she decorated with cheesecake shots of Miranda Benhayon, who moved into Serge’s house at 14.

And Alison previously insisted only teenagers undergo exorcisms at UniMed events. Now she adds the disgraceful fiction that only teenage girls stay in the Benhayon home.

Putting aside the obvious fact that in most people’s minds there is nothing inappropriate about teenagers staying at the home of family friends, another pertinent fact that seems to be lost on Esther Rockett and Lance Martin is that the Benhayon household is full of young people with Serge’s two sons and their wives currently living there and it was not so long ago that Serge Benhayon’s sons and their girlfriends were teenagers themselves.

I don’t have family friends that have teenage girls as houseguests when no other teenagers live in the household.

I would not send a teenager to stay with a family with such a warped sense of personal boundaries either, or where the father has lurid fixations on underaged sexual violence.

With respect to Lance Martin’s and Esther Rockett’s other allegations about ‘young girls’ staying at the Benhayon home; the truth is it is no secret that teenage girls from interstate and abroad stay at the Benhayon home from time to time, often to do work experience at the Universal Medicine Clinic or to attend courses. The fact is Serge has always shared his financial success with others…

More recently Esther has begun referring to these girls as ‘little girls’ considering perhaps that the idea of ‘little girls’ staying in Serge’s home has more shock value than ‘teenage girls’.

I’ve been to an Esoteric Healing workshop, and I would not recommend it to anyone – let alone a teenage girl.

As for the other, I posted a correction, but the ‘completely transparent and highly ethical outfit’ chose not to post it, as usual. 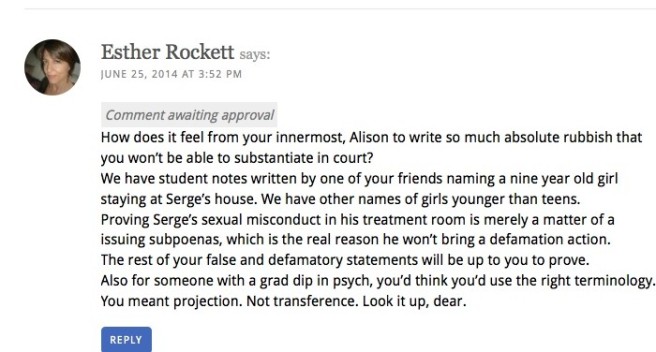