It’s on again, January 21, 2018 Lennox Head having flopped hideously in August 2017 in Tenterfield. No need to update on the content – it’s the same misogynistic condescension, predatory grooming and occult indoctrination festival targeting little girls that has been run for the past three years – by the Universal Medicine cult.

Last August they ran the thing in Tenterfield after the usual misleading advertising and warning locals they’d call the police if anyone complained. Unsurprisingly the event was a flop. I’ve posted on previous years’ failures as recruitment events – attended mostly by UM’s creepy camera wielding adults, a lot of them blokes. Marketers of Esoteric Breast Massage, Esoteric Women’s Health, get in early to target their future marks – deploying UM contractors and religious faithful to paint make-up on primary school girls, photograph them singing, dancing and posing, and use their images in the cult’s commercial publicity. Without disclosure.

In January, Universal Medicine front organizations, Esoteric Womens Health and Real Media Real Change hold the Girl to Woman Project Festival at Lennox Head – ‘a celebration of girls & women’ presented by the people responsible for sexual abuse apologism, the exploitation of teen girls and the bullying of whistleblowers in defence of their predatory religious leader, Serge Benhayon.

Girls will be taught how to be good consumers of damaging Esoteric Women’s Health products and services, how to pretty themselves up, and how to be model cult fodder. Esoteric Women’s Health – ‘inspired by the teachings of Serge Benhayon’, markets Benhayon’s abusive Esoteric Breast Massage and other occult services based on the teaching women develop breast and gynaecological disease from ‘male energy’.

This is the fourth year running for the event. It’s mostly attended by adults. The UniMed cult boasted an attendance of 400, but photos from the day tell a different story – it was more like 150, and most of them were cult lifers, the ones who lurch compulsively from event to event and latch like zombies onto any fresh meat.

According to local community radio stations and others, the event was also pitched deceptively – as a ‘child welfare initiative’, with no disclosure that it was a promotional event for UniMed cult products and services, and associated businesses.

It was an unabashed recruitment drive, introducing girls to the expensive, oppressive and sexually manipulative occult therapy dependency that is Serge Benhayon’s commercial religion – The Way of the Livingness. Little girls were applied with cosmetics in an introduction to Benhayon’s ideals of ‘femaleness’ and ‘true beauty’.

It may be no coincidence, that just as the promotions began for the 2015 Festival, I was served with a defamation action by Glorious cult leader, Serge Benhayon, for a blog I wrote a year ago on his congregation’s sexual abuse apologism and exploitation of young girls.

For those who aren’t aware, Benhayon has no qualifications, yet trains legions of Esoteric ‘healers’ to lay their hands on the ‘pubic chakras’ of sexual abuse survivors to ‘clear’ the ‘energy of rape’. He teaches that sexual assault is karma for being a sex offender in a past life, and that you’re ‘given your karma‘ at age 12 or 13. He teaches followers their children will be raped by evil spirits if they come into contact with someone whose had a glass of beer. The same bloke’s current wife first moved in with him at age 14 without her mother’s consent, and cult members boast of unquestioningly sending their juvenile daughters to stay in his home.

The same people behind this sordid event are the same ones exploiting teen girls who have stayed in Benhayon’s household ‘many times’ and ‘lived there for a time’, publishing photo testimonials of them vouching he’s not a ‘paedophile’ or groomer.

I’ve been served with legal action for raising concerns about that.

Before that, free speech proponent, Helen Simkins, from the comment above, was among the Esoteric lovelies who tried to have me arrested for voicing my concerns.

As I’ve stated before, asking why cult members take their kids to presentations where he talks about sexual violence, or send their young daughters to stay in the home of someone who touches the genitals of sexual abuse victims and pretends it’s healing is not ‘trolling’ or an accusation of paedophilia. It’s asking a valid question.

And if any of us behaved that way, Serge’s Esoteric lynch mob would be calling the police.

The defamation claim – a ‘strategic litigation against public participation’ (SLAPP), is another attempt to shut me down – part of a sustained campaign of harassment since I began blogging and making official complaints. (Please donate to my legal defence.).

A program of grooming and cult indoctrination 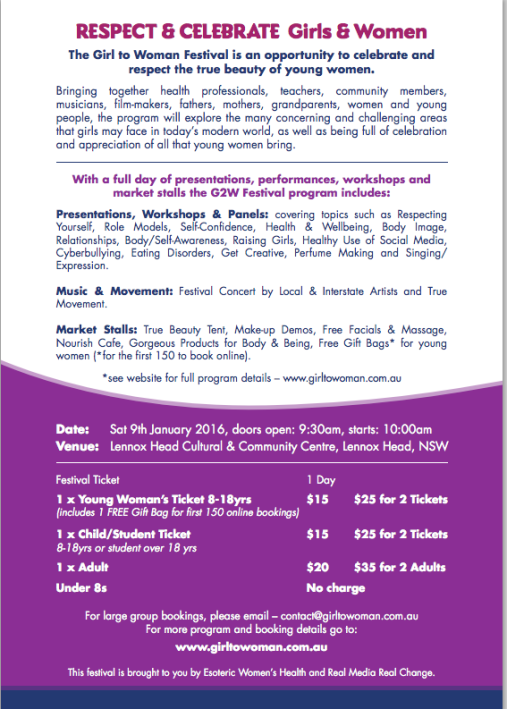 Role models: Top rung cult bullies are presented as role models. Sarah Davis, the organizer of the event, and presenter, Rebecca Asquith (formerly Rebecca Baldwin), are UM employees, and authors of the demented Universal Medicine Facts website, that made national news for its defamatory vilifications of whistleblowers, complainants and journalists. No joke, they’ll be there passing on their wisdom on cyber-bullying.

Their tips on social media use will include refusing to answer questions, banning dissenting comments and corrections, and instructing religious followers not to read critical sites – as a ‘self-loving choice’.

Girls will learn from UM’s religious role models, Serge Benhayon and Co. to dodge questions from journalists, lash out irrationally at criticism and hide behind a mob of payrolled attack artists and juvenile human shields. Other presenters, like Rachel Kane, Ray Karam, Sara Harris and Mary Louise Myers are Esoteric practitioners & small business owners profiting directly from endorsements from the bogan messiah. Others, like Simon Asquith work for the firm.

I notice a few of last year’s line up are absent, including true believer and GP Dr Jane Barker, who branched out from preying on cancer patients to young girls, disgracing the medical profession with her promotion of dangerous New Age fundamentalist garbage.

But education consultant, Kristy Wood, is back, having run programs targeting girls with sexist Esoteric claptrap. She’s one of the recruiters for the failed ‘Teachers are Gold‘ initiative for infiltrating schools.

Self Confidence, Body Image & Sexual Health: Will be handled by various unqualified sycophants. Girls will be told if they question the religious teachings or ‘detract from the work’, they’ll be punished as Judases and riddled with disease and disability for many lifetimes. If they speak out publicly or make official complaints, they’ll be mobbed on the cult’s defamatory websites.

Girls will be told they can develop breast and gynaecological disease from men finding them physically attractive, or from intellectual pursuits, playing sport or seeking equal rights. They’ll be told by blokes what it’s like to have breasts and experience manstruation, and they’ll be given the opportunity to put their names to sexual and gynaecological exhibitionism to sell abusive women’s health practices on the Women in Livingness blog. Kylie Connors will show girls how to develop an eating disorder by telling them root vegetables, grains, dairy products, legumes and most fruits are full of evil pranic energy that blocks the ‘light of the soul’.

Girls will learn how to convert family and friends to the ‘one true religion’, and how to be self obsessed when they’re not obsessing about Serge and the group. Special tutoring is offered in how to call anyone who disagrees with their proselytizing an abuser and how to take out a vexatious AVO.

‘Ask Dad’ is a discussion group with Ray Karam and Michael Benhayon on how women shouldn’t dance because it makes them desirable, or listen to non cult music, in case it ‘enters’ them. Michael will then sell his latest ‘Glorious Music‘ offering, before talking about how supernatural entities rape children if others in the household haven’t been adhering to his Dad’s commandments.

Girls will be given an opportunity for a sleepover at the Ascended Master’s home and to put their names and photo portraits on a website to assure the public he isn’t a ‘paedophile‘. 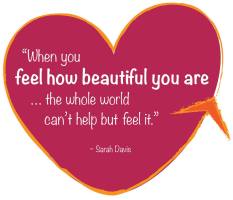 Serge Benhayon isn’t advertised as a presenter, but if he makes an appearance he will tell the little girls about women’s hygiene:

Serge then joined Natalie on stage and commented that the energy of the tampon manufacturer was also inside us if we were using them. Esoteric Women’s Presentation, Somerset UK, notes taken by Linda Green, 22-6-12

Serge then came on stage and said that the energy of a tampon in our body is like having sex with the dirtiest guy you know all the way through your period. Esoteric Women’s Presentation, Somerset UK, notes taken by Fiona Pierce, 22-6-2012

Finally the market stalls will be open to make sure UM’s prime investors, like Lie Lie Lie Rebecca Asquith and Sarah Karam, can plug their businesses and milk every cent out of the faith-full. The Benhayon family burlesque will perform to sell their energetically correct, non invasive muzak, and Emmalee Benhayon will be flogging her Essencia perfumes.

Because that’s what the Girl to Woman project is all about – softening up cult mothers to make their daughters available for every kind of exploitation, and encouraging girls to submit to the programming and start spending ASAP on Universal Medicine’s money for nothing products.

Local readers can inform their local school principals of the event and ask that it’s not promoted through schools. If you hear or read advertising for the event on local radio or in local papers, please make complaints directly to those. Universal Medicine is a dangerous and predatory organization that should not have access to any vulnerable individuals, least of all juvenile girls. Please spread the word.